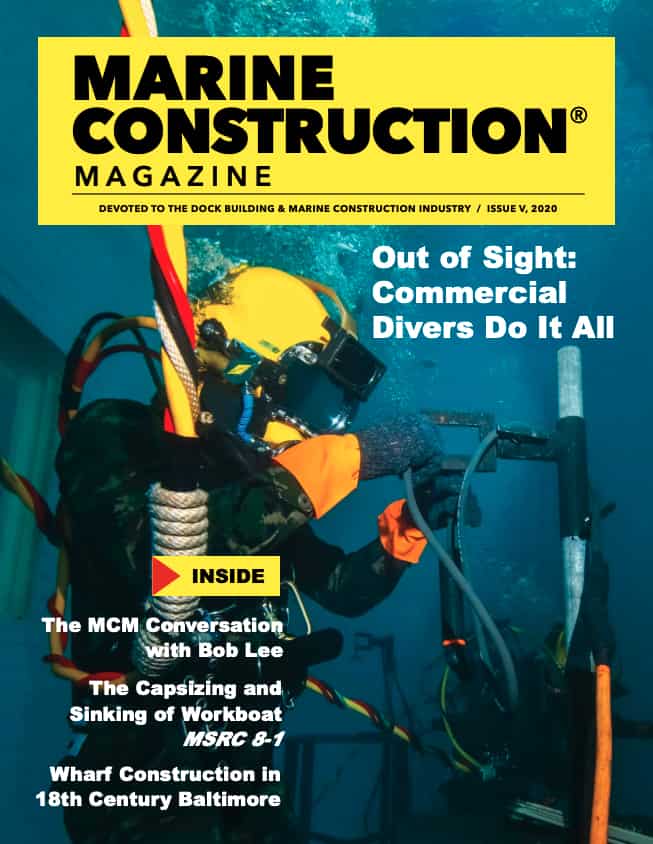 Bob Lee is, in his own words, a “one-man band.” Born and raised in North Carolina, Lee was trained in business management at Georgia Tech and was fascinated by mathematics and plastics. He joined the Dow Chemical Corporation after graduation and discovered the field in which he has spent the past 50 years—composite materials for marine construction applications.

After working for a Fortune 100 company and helping to build a startup in composite products, Lee knew that he wanted to run his own business. He formed his own company in 1989, and ever since, he’s built a reputation for entrepreneurship, collaboration and nearly fanatical customer service.

MCM asked Lee about his background, his partnerships with prominent marine construction firms – and how he keeps a one-man band moving forward.

MCM: Many people assume that a Georgia Tech graduate is “a hell of an engineer,” but you were a business and computer major, weren’t you?

Bob Lee: I started at the Georgia Institute of Technology as a math major, and decided I wanted to go into computers. They had a new degree called Management Science, which allowed me to use my mathematical skills but also to learn about marketing. We were the first graduating class, in 1972, in that major. At that time, my objective was to get my masters, but Dow Chemical was interviewing at the campus—and I was in the process of getting married. So I went to work instead of grad school.

Dow Chemical sent me to training at their headquarters in Midland, Mich. and around to their field offices. A very popular movie then was The Graduate, in which Dustin Hoffman’s character is advised to go into plastics. Well, it struck a chord in me that Dow’s areas of expertise were in plastics – polyolefins, polystyrenes, inorganic chemicals and others. So I actually did go into the plastics world.

Dow was looking for management trainees. They weren’t hiring just engineers or scientists. They brought in people with very diversified capabilities. At my first class in Midland, I met people from Berkeley, MIT, Notre Dame, and every one of them had a different degree. Dow’s idea was for you to develop yourself in what they called the Management Development Program. Eventually, you made the decision, along with others at Dow, where you wanted to go in the company.

Everybody started at a salary of about $9,000 a year. In 1972, we thought we were making good money! But Dow was strictly a salaried company. They gave stock options, but didn’t offer incentives. So I became more and more interested in growing my income by growing my own company.

MCM: How did you become an entrepreneur?

Lee: In 1979, I met a gentleman who offered me a golden opportunity to be vice president of a company he was setting up in the reinforced composites arena. And that’s why I left Dow, which was a superb company. It was a changing point in my life.

The company was Enduro Fiberglass Systems, started in 1978 by Jack Church, who was like a father figure in my life. Mr. Church was the kind of guy who lived by the motto “let’s shoot first and ask questions later”—in other words, let’s be aggressive, let’s be assertive, let’s go get the business. We grew Enduro from nothing to over $10 million in annual sales, and I stayed there for 10 years. But eventually, I decided that I wanted to own my own business.

You have to have good partners. And it’s not just the head people. It’s the people who are doing the inside work, the people in the shop. They’re what makes me successful.”

My first step was to become a consultant. I started The Lee Company in 1989 and consulted for two years. Companies hired me for my know-how in processes and products. One day, around 1992, I decided I needed to take it further. That’s when Lee Composites, Inc. became an entity. I took my consulting business straight into manufacturing, where I could develop and market products.

MCM: You moved from consulting to building a brand-new business. Why?

Lee: I wanted to do it my way, As a consultant, I was giving people my ideas and getting paid but not really seeing the benefit of those ideas.

It was a progression. I spent 10 years in the composite industry with someone who allowed me to take a company and grow it, to the place where I decided to consult, and I was very blessed. But I wanted more. I felt like I had the ability to give more, but also to see more of the benefits than what I was being offered. That’s the carrot I’ve always carried with me—wanting to reach further, and never being satisfied with where we are. And that’s why today, I can work 12 hours, seven days a week. There’s always more out there, and more people who need what we can offer.

MCM: If you had to summarize exactly what it is that you offer, what would you say?

Lee: I am the only one in my industry who has a complete system. What I do today, I do with partners who are the top in their areas of work. ShibataFender-Team, the leading manufacturer of fenders in the world. Creative Pultrusions, the leading manufacturer of fiberglass piling and sea walls. Ultra, number one in fiberglass hand rails. I’ve built my company around myself in the center, handling all of these products lines, making it a system for the client, a one-stop shop. I am the Home Depot of composites to the customers.

That’s why I travel so much. I go everywhere to be in front of the customer.

MCM: It sounds like your years as a consultant were critical to what you do today.

Lee: Yes, they were. Those years taught me the value of going and asking, “What do you need?” As a consultant, you’re giving people what they’re asking for. They pay you, thank you and say goodbye. Now, when I go to a customer, I just do my job and show people what I can offer. Not just my engineering ability, but actual products that I developed.

MCM: You’re a small company that works with some large corporations. What’s the secret to collaboration?

Lee: Having good partners. When you own your own business and your desire is to grow, not fail, and you want to take your company to heights that you know you can reach, you have to have good partners. And it’s not just the head people. It’s the people who are doing the inside work, the people in the shop. They’re what makes me successful. I never say, “I did it.” It’s “we all did it.” And I never say I’m an agent, a broker or a distributor. No. We are partners. Period.

“I could retire today, if I wanted to, but I don’t want to. I feel that in the next three to five years, there’s going to be a huge amount that we can accomplish.”

MCM: How has the pandemic affected your work?

Lee: Man, I can’t wait for this to be over. Normally, I would be in front of customers every single day. We’ve all restructured our businesses, doing virtual webinars and things like that, but nothing beats being in front of a customer.

MCM: How do you stay in shape to handle that level of work and travel?

Lee: I exercise, keep my weight, cholesterol and cardiovascular health at the right numbers. Both of my parents are 92 and have their minds. I’ve worked in an effective way. I don’t over-stress. I play golf on the weekends. I know how to work and I know how to relax.

MCM: Do you plan to retire?

Lee: People have asked me when I’m going to retire. And I ask them, “Why? Do I look like I need to? Am I not following up, am I not bringing in the orders?”

I am blessed. My company is under $10 million in sales, but that’s not bad for a one-man band. I could retire today, if I wanted to, but I don’t want to. I feel that in the next three to five years, there’s going to be a huge amount that we can accomplish.

MCM: What will you pass on from your knowledge and experience?

Lee: That my story is built on passion. If you truly believe in something, go do it. A one-man band can achieve success. You don’t have to have 55 people working for you. You just have to have the support of others. Partners.

It wouldn’t bother me to go on the lecture circuit, because I just love doing presentations. I thoroughly love being put in front of people. Ask me anything. If I don’t have the answer, I’ll get it. But that’s in the future. I still have roads to travel, mountains to conquer. The business is out there.

This page can be Found Here.